How Are Suicide And Addiction Related? Suicide is referred to as the deliberate ending of one's own life through its actions. Suicidal attempts are considered one of the highest health epidemics by many researchers in the medical field; suicide is one of the leading causes of death among youths. Addiction to alcohol and drugs increases the risk of suicidal frequencies. However, individuals abusing drugs or having alcohol addiction are 14 times more prone to die by suicide than others. If your loved ones are addicted to alcohol and substance use, it is important to recognize the warning signs of suicide and know their risky connection with suicide and how to prevent its side effects. 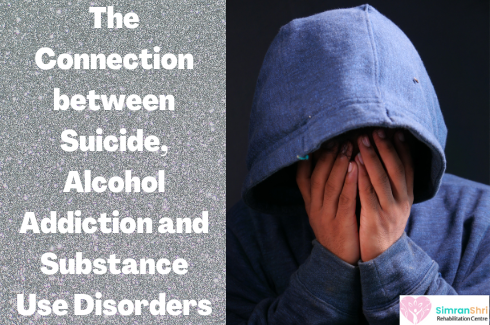 Drug overdose could be accidental or intentional. It occurs when an individual consumes more than the medically recommended doses for a drug. Nevertheless, few individuals might be more sensitive to certain medications, so the less dangerous toxicities could be dangerous for them; a dose still within acceptable medical use might be too heavy for them to handle.

The banned drugs, used to get high, might be taken excessively when an individual's metabolism could not detoxify the drugs instantly to avoid inadvertent adverse effects. Individuals respond differently to drug overdoses, and treatments are tailored toward the individual's requirements. Adults are more probable to overdose on one or more drugs to harm themselves. Attempting to harm personally might represent addiction and suicide. In addition, individuals who purposefully overdose themselves on medications might suffer from mental health and suicide.

Does Addiction Increase The Risks Of Suicide?

The relationship between addiction and suicide has a high public health influence. Several recent assessments have helped shed light on the correlation between substance use and alcohol misuse, and suicidal behaviour. An evaluation of lowest-age drinking laws and suicides among the youths aged 18-20 years observed a correlated decrement in minimum-age drinking guidelines with increased suicide attempts among the youths. In a large cohort of examinations, adults drinking alcohol have reported the risks of depression due to suicidal attempts. In another study, the individuals who attempted suicide during their lifetime were more likely to suffer from depression, while others had an alcohol or substance misuse disorder. In addition, in an investigation concerning non-traffic deaths are connected with alcohol addiction, around 20% were suicides.

Suicide is one of the common causes of death among younger adults. Hard-core drinkers or those using illicit drugs are more probable to think about planning or committing suicidal attempts. Addiction to heavy substance usage is common among individuals dying from suicide. It includes suicide related to opioids, narcotic painkillers, cocaine, marijuana, amphetamines, and prescribed opioids or heroin.

Individuals at risk for suicide might struggle with both the addiction and other risk factors simultaneously. They might possess depression or anxiety disorders, long-lasting ailments, antiquities of abuse, divorce, or financial issues that might lead to drug or alcohol misuse.

Don’t ignore the warning signs of addiction and suicide or leave your loved ones alone. If you live with someone observed to be at risk of suicide, lock all the dangerous arms in the house. Motivate them to visit a mental health professional or psychologist.

How Can SimranShri Rehabilitation Centre help In Overcoming Addiction?

SimranShri is the best rehabilitation centre in India, offering dual diagnosis treatment that simultaneously treats both factors of addiction and the mental health status of individuals for commit suicide. Suicide and addiction are interrelated and have a major influence on public health epidemics. Choosing to attend a rehabilitation centre for de-addiction treatment is an empowering step towards freedom. The rehabilitation facilities provide safe and comfortable methods for achieving abstinence and a higher likelihood of maintaining it. Every individual requires unique care based on several factors, including what substance misuse they are addicted to and how long they are addicted. Certain therapies and medications can help in overcoming addiction issues. The mental health professionals curate an individualized treatment plan to meet individual requirements.