What Are The Dangers Of Antidepressants? 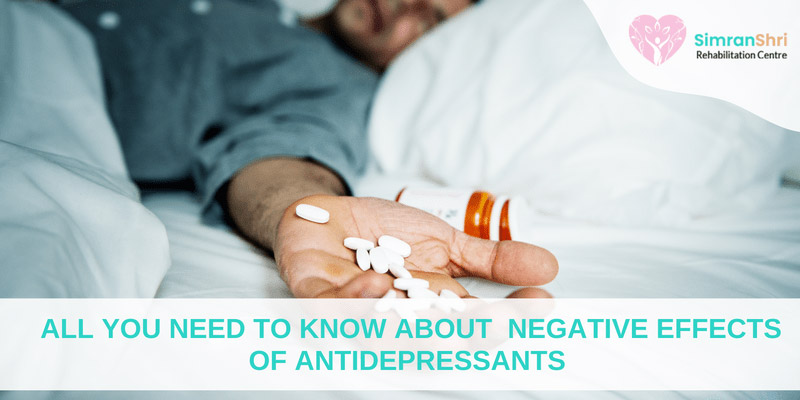 Antidepressants are the most commonly prescribed mental health medications. As per the Centres for Disease Control and Prevention, from 2015 to 2018, 13.2% of adults used antidepressants, and the use among women was 17.7%, then the use in men was 8.4%.

Irrespective of how commonly these medications are used, there are dangers of antidepressants that most individuals aren't aware of.

In this blog, you will come across the effects of antidepressants and how to manage them. 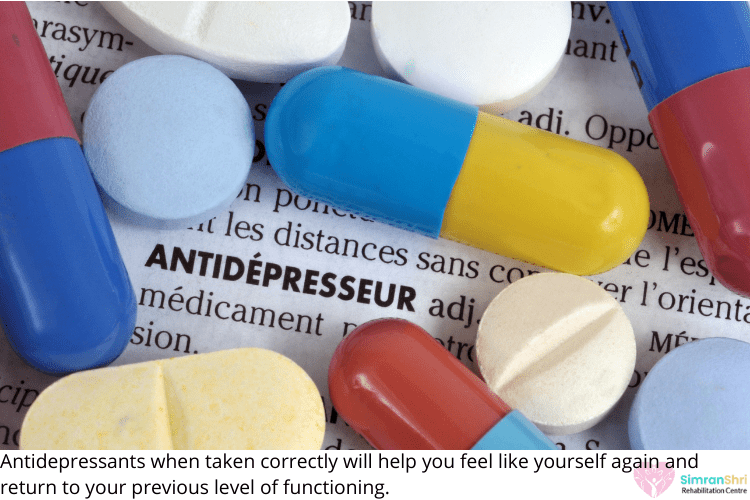 ●    Selective serotonin reuptake inhibitors (SSRIs): are one of the most effective depression medications. These block the ability of the brain to absorb serotonin. Which stabilises one's mood as the brain cells can now easily relay messages from one to the other.

●    Tricyclic antidepressants (TCAs): this medication is used to treat depression, some types of anxiety disorder, and fibromyalgia.

Not every individual responds well to antidepressants. There are several other treatment options available to deal with depression effectively. At SimranShri Rehabilitation Centre, the mental health doctors address every aspect of a disorder that an individual is struggling with to help them develop healthy coping skills.

How Do Antidepressants Work?

Now that you know what antidepressants are, it is essential to know how they work. This will help you understand the dangers of antidepressants better.
Antidepressants act on some parts of the neurotransmitters, these work as chemical messengers that travel through neurons and are released through the presynaptic terminal from the end of neurons. The gap in which these neurotransmitters are released is known as the synaptic cleft; the next postsynaptic neurons receptor takes it up. This is the modus operandi of chemicals travelling in the brain and influencing one's behaviour and mood.

There are different types of antidepressants, and each affects the neurotransmitters differently.

What are The Effects of Antidepressants?

Another problem individuals face with long-term depression medications is that they experience withdrawals, also called antidepressants discontinuation syndrome, after stopping the medication usage. This is similar to drug dependence when individuals start feeling physical and emotional unpleasant symptoms known as withdrawals when they refrain from drug use. These symptoms include insomnia, blurred vision, flu-like symptoms, difficulty concentrating, and random fits of crying.

How to Avoid Effects of Antidepressants?

SSRIs are considered the safest type of antidepressant and are best to be taken for long-term use.

The risks of long-term antidepressant use discussed above occur in a few people, and mental health medications should disclose their side effects.

The following ways can help avoid the effects of long-term antidepressant usage:
●    Check with a mental health doctor at regular intervals (preferable biannual) to assess the optimum functioning of the medications or to alter the dosage if required.

●    If you wish to stop using antidepressants, discuss it with your doctor and gradually taper or stop the usage. Slowly withdrawing from the medicines can help with reducing the symptoms and prevent depression from relapsing.

●    Combine counselling therapies such as cognitive behavioural therapies along with antidepressants. One can work on their behavioural problems and patterns that result in mental health disorders.

●    Carefully observe any changes in symptoms, such as sleeping issues. Reporting these changes early to a mental health professional can help make the required alterations in the dosage.

●    If you feel that the medications aren't working well, it is advisable to visit a mental health professional. They can assist you by changing the medications, increasing the dosage, or adding lifestyle modifications.

●    If one tends to gain weight or starts facing diabetes or blood sugar issues, they should add regular physical exercise and dietary modifications to their lifestyle. These changes can be a result of antidepressants.

Lastly, it is unsaid that one should refrain from self-medication. If you or your loved ones suffer from mood or anxiety disorders, you should immediately connect with a mental health professional. Our mental health counsellors are just a call away; they can guide you with the best practices and treatment options to help you recover.