What Is Emotional Dysregulation? Emotional dysregulation refers to poorly managed emotional reactivity that defies the commonly acknowledged or traditional spectrum of emotional responses. It is also characterized as mood swings, labile mood, or marked variation in mood.

Anger outbursts,  sadness, anxiety, substance abuse,  self-harm, suicidal ideation, self-harm, and other self-destructive behaviors are signs of emotional dysregulation. This illness can impact the quality of life, social activities, and relations at home, work, and school over time. 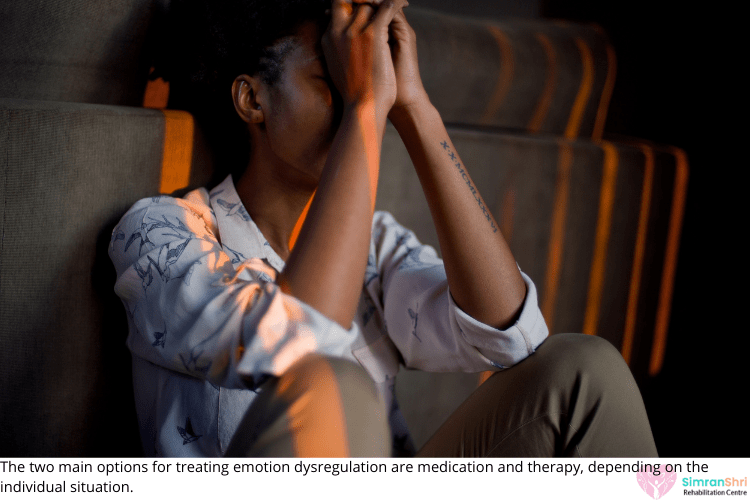 The emotional dysregulation symptoms include:

Here are some examples of how someone suffering from emotional dysregulation may appear:

●    When your significant other cancels plans, you assume they don't love you, so you cry all night and eat junk food.
●    The bank teller informs you that they cannot assist you with a certain transaction and that you must return the following day. You scream at the teller and toss a notebook across the desk at them in a furious outburst.
●    You're at a corporate dinner, and everybody is conversing and having a good time, but you feel like an odd person out. You go home after the event and binge to alleviate your emotional suffering.

Emotional dysregulation can also suggest you're having problems recognizing the emotions you're feeling. It could indicate that you're perplexed by your emotions, feel guilty about them, or are overwhelmed by them to the point where you can't make decisions or control your conduct.

What Are The Causes of Emotional Dysregulation Disorder?

Emotional dysregulation can be caused by a variety of factors, including:

●    Early childhood trauma. These are traumatic incidents in a person's early years of life. This is considered to be the most crucial stage of human development.
●    Child neglect. A form of child maltreatment in which a kid's essential needs are not met, such as inadequate supervision, health care, clothes, housing, and other physiological, psychological, cultural, educational, and safety requirements.
●    Traumatic brain damage is a type of traumatic brain injury. A brain injury induced by an external force, most commonly a forceful knock to the head.
●    Low levels of invalidation on a long-term basis. This happens when a person's feelings and thoughts are dismissed, ignored, or judged.

Experts believe that when you have emotional dysregulation, your neurotransmitters' ability to act as "emotional brakes'' is reduced, causing you to stay in a longer "fight or flight" reaction. During times of high stress, the prefrontal cortex — the brain region responsible for emotional control — is essentially turned off.

Borderline personality disorder. This mental health disorder affects how individuals feel and think about themselves and everyone else, making their day-to-day functioning difficult. Self-esteem concerns, difficulty regulating emotions and behaviour, and a habit of insecure relationships are all part of it.

Frontal lobe problems are commonly caused by explosive violence, common in war zones. People who suffer from stroke, cancer,  a brain infection, stroke, or a neurodegenerative condition may also feel it.

Obsessive-compulsive disorder (OCD)  is a mental ailment characterized by recurrent, unwanted thoughts, obsessions, or the desire to repeat a behavior. The brain's prefrontal (thinking) section can be disrupted, resulting in substantial emotional dysregulation.

What are The Emotional Dysregulation Treatments?

One or a combination following emotional dysregulation treatments may be used to help individuals:

Counselling. This will usually include cognitive-behavioural therapy, which includes emotional management skills, mindfulness and acceptance.

Antidepressants. There are multiple antidepressants on sale, each of which works somewhat differently and has different side effects. When it comes to antidepressants, your doctor can assist you in finding one that is right for you.

Diet and exercise are essential. Combining counselling and medicine with a good diet and exercise may be good. This can help you make sure you're getting adequate vitamins and nutrients to maintain your physical health and your mood and self-care practices.

Emotional management. A mental health expert can teach you full influence and articulation of your feelings to help you reach stronger emotional regulation and reduce severe responses to emotional stimulants. This is usually accomplished by skill development and interventions, which are particularly beneficial in achieving more consistent emotional stability.

Underlying Conditions. An underlying physical ailment can sometimes cause emotional dysregulation. Any underlying medical issues that may be producing mood-altering behaviour can be diagnosed and treated by your doctor.

Advanced Psychological Tools. A competent mental healthcare professional can assist you in learning and practising practical psychological strategies that can help you boost your self-esteem and gain more emotional balance. This could entail finding a new course, finishing school, or receiving valuable on-the-job training.

These skills and techniques can be learned and applied at any age, but they are most efficiently acquired and mastered with the assistance of a qualified counsellor who can serve as a mentor and trainer throughout the process.

You're not alone, and there is nothing to be ashamed of. Make an appointment with our mental health expert as soon as possible if you think you might have a mood problem. We at SimranShri Rehabilitation Centre help men combat mental health disorders and provide the Best Drug Addiction Treatment.