What Is Weed And Its Addiction? Marijuana is a psychoactive substance made from the Cannabis plant. Mainly used for medicinal purposes and use to treat patients. It is mainly found in the mountains. The whole process of making drugs is firstly dried, crushed, and consumed (in the thin paper, like a cigarette, or in a pipe, like tobacco).

Weed is also available as "edibles." Edibles could be medicines or meals that contain one or both of the active ingredients in Marijuana, such as Tetryzoline drocannabinol (THC) or cannabidiol (CBD). Edibles have the same effect as consuming cigarettes, although the time between consumption and its effect varies from person to person.

Marijuana could be used in various ways; some people consume a resin-like substance (a by-product of crystal-like structures formed during the harvesting or smoking of ground-up cannabis flower) that produces a much stronger high for the individual who consumes it. This material in a medical language is called "wax" or shatter" Weed is a drug, but it's not as harmful or develops an addictive state compared to drugs like cocaine, opioids, and LSD. It is an emerging social trend among the Weed consuming population; people who use Weed have a 10 per cent chance of becoming addicted. Marijuana use can lead to problematic habits, also referred to as a drug use disorder, leading to addiction in severe cases. Then comes the time when they seek weed addiction treatment. 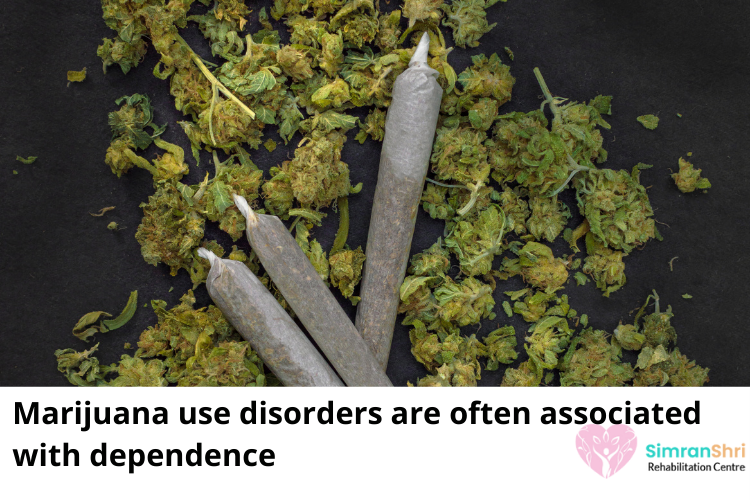 According to recent studies, two-thirds of pot smokers may have some kind of substance abuse disorder. Weed users under 18 are four to seven times more likely than adults to develop cannabis consumption-related problems. It can be resolved by using weed addiction treatment, but Marijuana usage and related illnesses are strongly associated with dependence; there comes the time when a person experiences withdrawal symptoms after long usage of Weed. Irritability, mood disturbances, lack of appetite, craving, insomnia, and various forms of physical discomfort are frequent among marijuana users. These symptoms peak in the first week after quitting, lasting up to 2 weeks.

Some of the symptoms associated with a weed addiction

The short-term associated risks with Marijuana are no threat to the life of the users, but most likely dangers which cause Some of the immediate side effects of weed consumption and signs of marijuana addiction are:

Marijuana dependence and its treatment

As per the study conducted, there has been a history of students who are regular users of Marijuana who seems to have lost tolerance. Some of the bad behaviours and symptoms notified:

There are many weed addiction treatments, such as (MET) Motivational enhancement therapy to resolve ambivalence about engagement and treatment. Rather than becoming a guiding force to the recovery of the patients, this therapy aims to be working on the step by step recovery.

(CBT) Cognitive behavioural therapy can help manage problems by changing how individuals think and perceive the outside force. Mostly common for treating patients suffering from severe anxiety, depression, and overall mental health concerns. It's a kind of psychological treatment that helps learn how to be strong and fight in the journey.

Though according to the scientific assumption, there's no such concrete base or study which evaluates the damaging effects of weed consumption despite unclear causes and affect of its dependence,

Causes of marijuana addiction and abuse:

• It's a slow-moving drug chasing an elusive high in life.
• According to study based assumptions conducted at Duke University. The study reflects the decrease in IQ points among teens between 13 and 19. However, speculation of the IQ differences can be segregated by other related factors.

How much Weed is addictive?

As per a study by the National Institute of Drug Abuse, 19 per cent of people who consume Marijuana will have more dependence on it than 17 per cent who start consuming this in their teens. About 30 per cent of marijuana consumers may experience some degree of disorders, which takes the form of serious addictive behaviour in some.

There are many best substance use disorder treatments, and many weed addiction treatment and de-addiction centres are progressively working across, for those families suffering the pain of their loved ones are often misguided or land in a confused state of mind as to which one to choose. There's always a fear in their mind of being misguided or fear of ill-treatment of the patient. Then comes the SimranShri Rehabilitation centre, which gives the best services in terms of hygienic environment, proper sanitation and cleanliness to promote a stress-free environment through spiritual healing among the patients.
How to Quit Marijuana: When Do I Need Help?

Marijuana addiction may be treatable despite its challenging aspects. The people who are addicted to the same seem to feel pressure in their initial stages at the time of their withdrawal or recovery from the substance or who are consuming it for a long period.

Some of the services that SimranShri Rehabilitation has to offer are:

● Highly qualified and experienced team of mental health professionals.
● Family counselling and couple therapy.
● Pick-up facilities for those seeking treatment away from the centre.
● The post-discharge treatment plan is to sustain sobriety.