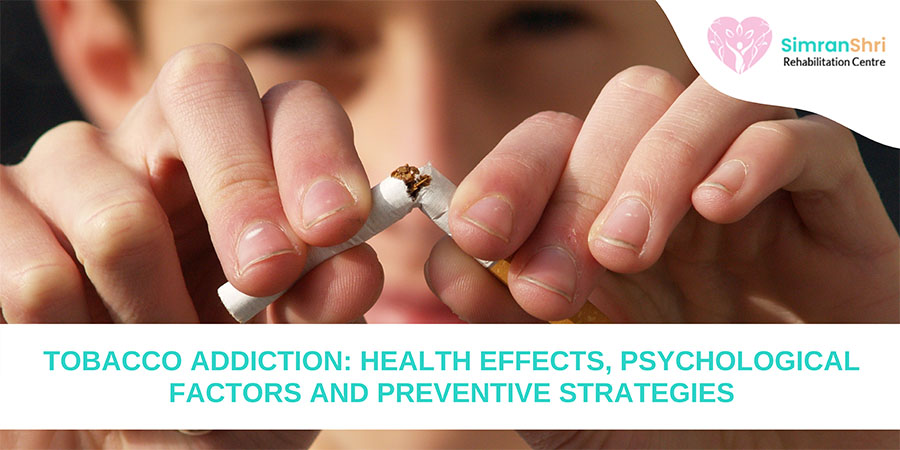 Every time we buy a pack of cigarettes, a warning on the pack states, "tobacco is injurious to health" or "smoking causes cancer," yet we rarely care. Statistics show that the average age for the first time using tobacco is 13; most teenagers become part of this race not because they like smoking but mainly to act cool in front of their peers. The number of adults is even more in the male it is around 25%, and for females, it is about 12-13%. People ignore the tobacco effects have on health, disregarding the dangerous side effects, and run away from tobacco addiction treatment.

In the long run, passive smokers are affected as severely as active smokers. Humans want to live their lives to the fullest, but they decrease their lives by around 14 years using tobacco and other abusive substances. Some harmful effects of smoking on health include heart disease, lung disease, oral cancer, kidney, liver, and pancreas failure. The list goes on and on, and most are even life-threatening. SimranShri Rehabilitation Service for addiction treatment program can save you and your loved ones from all the ill effects of tobacco.

The Harmful Effects Of Tobacco Use

There are more than 7000 chemicals in tobacco smoke, of which at least 250 are known to be life-threatening. These chemicals in tobacco are harmful to both smokers and non-smokers. Breathing even a little bit of smoke can be very dangerous. Tobacco dependence programs help treat the addictions of individuals with a variety of therapies, medications and support such that one can stay away from tobacco and its harmful effects. Not seeking a tobacco addiction treatment can result in cancer, diabetes, heart stroke, etc.

The most common and well-known disease, even the cigarette pack, sends a message regarding it. Cigarette smoking causes various forms of cancer. Around 42% of males and about 18% of females are affected. But the most common is lung and mouth cancer; there are twice as many deaths from oral cancer compared to lung cancer as most Indians like to chew tobacco. Around 40% of adults are exposed to secondhand smoke at home and work. Smoking also causes cancer of the voice box, kidney, liver, pancreas, stomach. Smoking for a prolonged time can affect cancer treatment and more serious complications leading to death.

Cigarette smoking is a significant cause of heart stroke and disease, every 2 out of 10 heart strokes, leading to death mainly because of smoking. Non-smokers who breathe secondhand smoke are affected have 20-30% of the risk because of smoke.

Smoking can affect the body by:

●    They make blood thicker, leading to clots, blocking blood flow to the heart and brain.
●    Increasing a specific fat in the blood and lowering good cholesterol.
●    Increasing the amount of calcium and fat in blood vessels and damaging the cells that line up make it thicker and narrower.

Smoking has significant effects on the lungs as cigarette smoke directly goes into the lungs, damaging air pipes and air sacs (alveoli). It causes chronic obstructive pulmonary disease with including chronic bronchitis. Asthma patients are more likely to be triggered by smoke having an asthma attack or death.

Smokers are more prone to type 2 diabetes than non-smokers. The person with type 2 diabetes will have a hard time controlling the sugar level if they continue smoking, leading to serious complications.
●    Eyesight loss
●    Numbness in hand in feet, damage of nerves
●    Poor blood flow in legs and hands

An early resort to tobacco dependence treatment can help you and your loved ones from grave diseases and dangers.

Tobacco is commonly abused in various ways and forms.

Tobacco use in smoking:

Cigarettes are the most common form of tobacco used for smoking. Still, it is more familiar with the urban population as it comes under the higher cost side. Rural populations or lower-level people prefer other tobacco products like beedi, hookah, chhutta, dhumli, or chillum. With various brands of cigarettes coming both on the local and national level, people are becoming more heavy smokers than before. The hookah has also become a sign of socialization between adults and adolescents and has become a prominent form of tobacco smoking.

So tobacco is not only used for smoking purposes but also for non-smoking purposes. People use it as a mouth freshener after meals, including beetle, pan masala, khaini, and snuff.
The symptoms of smokeless tobacco are different from smoking tobacco, but still, we cannot deny that usage of tobacco in any form can cause various health concerns.

Psychological Factors Leading To Tobacco Use:

Though the health effects have been known to people for years now, it is a central question why people still use it. When adolescents move towards adulthood, they have this unique love for trying and taking new risks, more like adults. There can also be other factors like family history of tobacco use, peer influence, easy access to such products, and these unique marketing by tobacco industries.

People belonging to a family where elder siblings, fathers, or grandfathers smoke children are more likely to follow the trend. In such a family, it is a symbol of manhood transferred from one generation to another and more like a legacy that one needs to follow in all likely conditions. And hence it is expected for them to make it part of their habit.

Peer pressure is also one way to initiate the smoking habit early to get socially accepted. Teenagers are more likely to follow such a trend. When in distress, if friends offer bhidi, teenagers cannot deny this, which later becomes part of their daily lives. This dependence can only be cured through tobacco addiction treatment.

Tobacco products are freely available in every nook and corner. With so many brands coming, everyday prices are getting cheaper, making it easy to access tobacco.

Advertisements by the companies are so unique and misleading, showcasing how cigarette smoking is considered cool or making it part of your daily life will make you look cool. This advertisement attracts the minds of teenagers to use similar products to make them trendy. Promotions of tobacco cessation programs will help draw people’s attention and awareness towards its importance.

With such an enormous amount of users, it is important to make people aware. It is seeking help from a tobacco de-addiction Treatment centre to help you recover from the harmful effects of tobacco and quit its intake. With all this said, smoke is detrimental to your physical health and affects your mental health. We have to break the stigma that mental health carries and work together to help fight tobacco and substance use.

Benefits of Choosing the Best Drug Rehabilitation Centre in India